We’re in pre-production for this year’s school musical, We Will Rock You.  The school had a large, 5m stereoscopic 3D screen which we’ve used for the past few productions.  And with WWRY we’re getting a chance to increase the amount we’ll be using it.

We’re not only providing 3D FX for the production though – as the projectors will be on the whole time, we’ll also be adding a number of 2D “virtual sets”.

This is the first completed example of one such set: 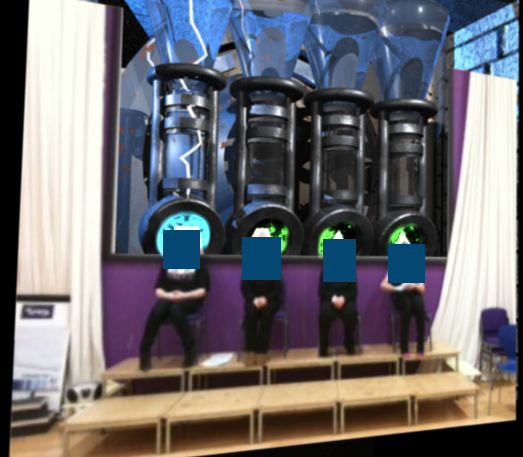 Some imagination has to be used here.  We started with a photo to sort out scaling and placement.   That photo was imported into Cinema4D where we cut out the screen and then modelled the “booths” behind it.

It’s for the scene where Khashoggi is torturing the prisoners.  On command, each one in turn is electrocuted to “Flash, AHA!”.

This is the view we’ll actually render out.   We’ll be playing the whole production through Stereoscopic Player which has playlist capability, so the electricity bursts will be made as separate videos and stacked, to be cued manually.

A daft little extra feature I’ve added is the generator in the background.  I’ve set it up so that its spinning “generates” the electricity when it gets to a certain speed.

I downloaded the lightning bolt file years ago and have used it a few times.  You can find it here.

Tutorials and videos, mainly After Effects, but with some 3D and puppetry stuff too. View more posts

This site uses Akismet to reduce spam. Learn how your comment data is processed.